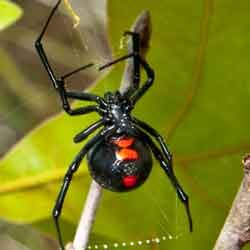 Florida is home to a wide variety of creatures, and arachnids are no exception. We have all kinds of spiders here. But we will be focusing on the spiders that make themselves a pest in our yards, gardens, homes, and businesses.

All spiders have some kind of venom with which to paralyze and consume their prey, but not all venom is medically important to humans. Spiders that have a venom capable of causing severe illness, and even death, are considered poisonous. In Florida, we have five species of poisonous spider: the brown recluse spider, and four species of widow spider.

The most prominent characteristic of the brown recluse is the dark brown violin mark on its light brown back. This mark is oriented with the stem of the violin pointing toward the abdomen of the spider, and is hard to miss. You may also notice that this is not a hairy spider. This lack of hair is helpful in distinguishing brown recluse from other brown spiders, such as the funnel weaver spider or wolf spider.

The reputation of the brown recluse precedes it. While this spider definitely deserves respect for the necrotic properties of its venom, it is not the thing of nightmares many stories paint it to be. This spider has the word recluse in its name for good reason. Brown recluse spiders don’t prefer to be around humans. You are most likely to come in contact with this spider when visiting an attic space, storage room, garage, shed, or outbuilding. Be careful when opening stored boxes.

We all know the black widow. This spider needs no introduction. You may even be aware that this jet black, hairless spider can be easily identified by the red hourglass mark on the bottom of its abdomen. But, what you may not know is that we have two species of black window in the state: the southern black widow and the northern black widow. While there is a visual difference between these two spiders, like the presence of red dots on the top of the abdomen, and a break in the middle of the hourglass mark on the bottom of the abdomen, there are few differences between these spiders as they relate to humans. This can also be said of the other two widow spiders in Florida, the brown widow and the red widow.

All widow spiders have a venom that can be deadly to humans, but the risk of dying from a widow spider bite has significantly decreased since the discovery of antivenom. However, it is still extremely painful to be bitten by one, and these bites come with many unpleasant physical symptoms, such as sweating, muscle cramps, chills, fever, nausea, and vomiting. Fortunately, the black widow is a skittish creature that will flee when approached. Bites usually only happen when humans reach into or come near to where a black widow is hiding, like when putting a foot into a boot, putting on a shirt, reaching into a pile of logs, or flipping over a rock.

There are many more non-poisonous spiders in Florida than there are poisonous ones. Too many to cover here. But there are three that deserve mentioning.

These spiders rarely enter homes, but they can be scary when you come across them in your yard or in your garden, especially if you mistake them for the brown recluse. Fortunately, these spiders have hair to help you tell them apart from those brown recluse spiders. And though a bite from this spider may hurt, it is likely to only leave a painful bite and a red welt. If you see a tangled web that looks like a funnel, especially over the entrance to the burrow of a wild animal, you might want to steer clear. You’re likely to find a funnel weaver spider inside.

Here is another spider that gets mistaken for the brown recluse quite a bit. But, like the funnel weaver spider, these spiders are hairy. In fact, you may have more trouble telling wolf spiders apart from funnel weaver spiders than you will brown recluse. One clue wolf spiders give is that these are spiders you’re more likely to find in your shed, garage, exterior closet space, or basement, especially if you have any water or moisture in these places. Wolf spiders don’t create webs, like the funnel weaver. They hunt for their meals.

For assistance with these and other common spiders in northern Florida, reach out to us at McCall Service. We’re looking forward to serving you.